This is inspired from a comment on this proposal thread and coming from Blender.

Is there ongoing development for a camera gizmo in Paraview/VTK much like the one in Blender? 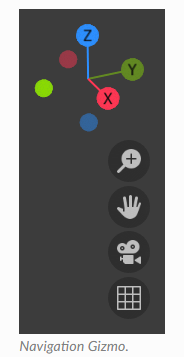 I think such a feature would boost the UX part of Paraview. (Not to mention how often I mess up the camera when I present something in Paraview to someone)

If there’s no development in that direction, I’d be happy to start it. An initial idea is to derive a vtkWidgetRepresentation and work it out from there. All the inventory (camera, interaction, representation) already exists, its just a matter of creatively glueing them together.

This proposal might be better of in VTK forums, but I figured I’d get improved feedback here on the UI/UX.

Yes please ! I wish ParaView had a gizmo like this.

Afaik, there is no ongoing development for this. If you want to give it a go, you are very much welcome.

Initially started with embedding QWidget within pqQVTKWidget but it was difficult to implement event handling. So I went ahead with 2nd gen VTK widgets framework.

I have a start on this. The work is in progress. MR

These were the things I needed to set it up.