Can't remember filter I used in past. Have a plot.

A few years back, I made the plot below. I want to do something similar but I can’t for the life of me remember which filter creates this effect. I remember it being something somewhat obscure. Does anyone know what this is? 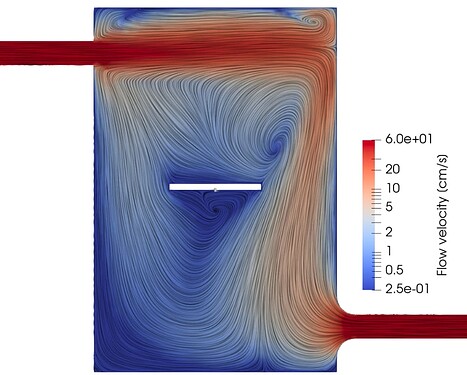 It is the SurfaceLIC representation. To use it first load the plugin from Tools > Manage Plugins… . Then it should be available as a representation option for any new objects created.

OK, that’s weird. What I had to do is load the plugin, then make it auto load, then restart ParaView. The Representation doesn’t seem to correctly update. I’m on a Mac. I will write up a bug.

I knew that was the one once I saw it written out. Thanks a lot!

Can confirm. I also had to restart ParaView.

A bug doesn’t need being written up. The SurfaceLIC plugin is going to move to representation by default in ParaView 5.11.0, which should have a release candidate cut RSN (Real Soon Now).

What I had to do is load the plugin, then make it auto load, then restart ParaView.

You only need to create a new view.

A bug doesn’t need being written up.

Actually there is a bug, it is just not specific to the SurfaceLIC but to all plugins adding representations.
It’s been here in ParaView for a very long time. I’ve written it up. https://gitlab.kitware.com/paraview/paraview/-/issues/21499