Colormaps and widgets vs pipeline sources

I’m working on a custom 3-D widget and don’t understand how to make it display data using a colormap that PV users can edit.

I am not entire sure I follow what you’re asking but here are a few things to note:

(I am assuming by color map you mean a proxy for color transfer function. The following assumes that.)

*pqColorMapEditor is simply a “view”. It should the active representations color map. Hence it’s not the place to go looking for color maps.

pqColorMapEditor is intended to be a dock panel – specifically designed to handle active color map. It internally simply uses pqProxyWidget for the LUT proxy. So you can create your own pqProxyWidget for the appropriate LUT proxy. Take a look at the code in pqColorMapEditor…it’s primarily just plumbing things together for the purpose it’s designed for. You can similarly do the appropriate plumbing in your custom QWidget (or whatever) subclass.

@utkarsh.ayachit Thanks! I am able to get by using the existing panel by having users switch SMTK’s representation to use the scalar array whose transfer function they want to edit and using the vtkSMTransferFunctionManager to configure the widget with the proper transfer function. 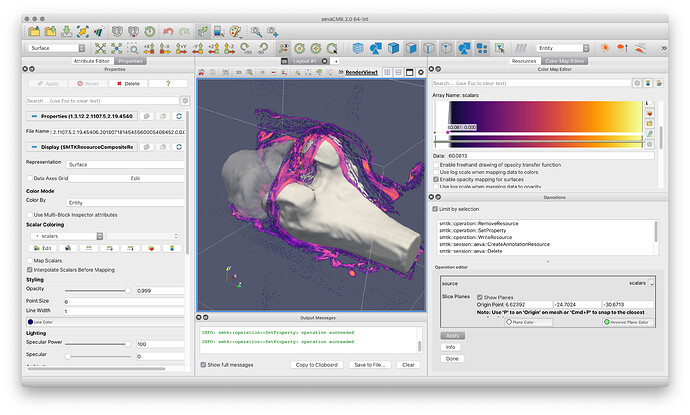