Custom Glyphs/Representing rotation of an object

I am attempting to use Paraview to visualize the output of a rigid body dynamics simulation - you can think of the objects as cars, planes, or any other 3D object. The output of the simulation is a state vector associated with each object, consisting of 3D position and rotation angles, and their time derivatives, parameterized by time.

After obtaining these results for each time step (results stored in a Numpy array or CSV file, etc), I would like to visualize (and animate) the trajectories of the two objects. The minimum visualization requirement would be a coordinate system triad for each object moving and rotating relative to each other, but it would also be nice to insert a glyph of the real object for a more “realistic” rendering.

In Paraview, I know how to plot trajectory curves as a Programmable Filter/spline. However, I would also like to represent the rotation angles of the two objects. The first thing that comes to mind is the Glyph, but from what I can tell, the stock Glyphs are axisymmetric and thus wouldn’t be good for displaying a rotation. Is there a way to import a custom Glyph into Paraview in order to visualize the rotation of a body?

If not, is there a different software that you think might be better suited for this task? The best-case result would be something like this (taken from Wikipedia, https://upload.wikimedia.org/wikipedia/commons/8/8e/ToupieEuler.png): 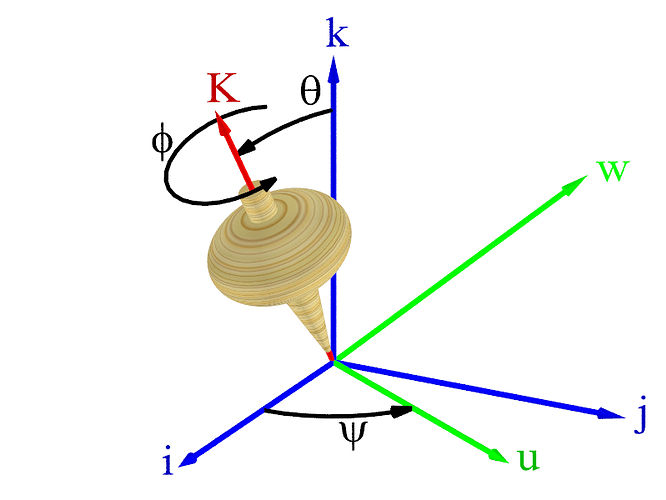