Hi everybody ! enjoy your sunday !
Some time when I have to post process a polymer (using spherical glyph as atoms and tube for the virtual connection) if the polymer chain going to collapse and the atoms are very close each other I have to reduce the ray of the glyph sphere I don’t obtain a good sphere but a rough approximation like in the pictures 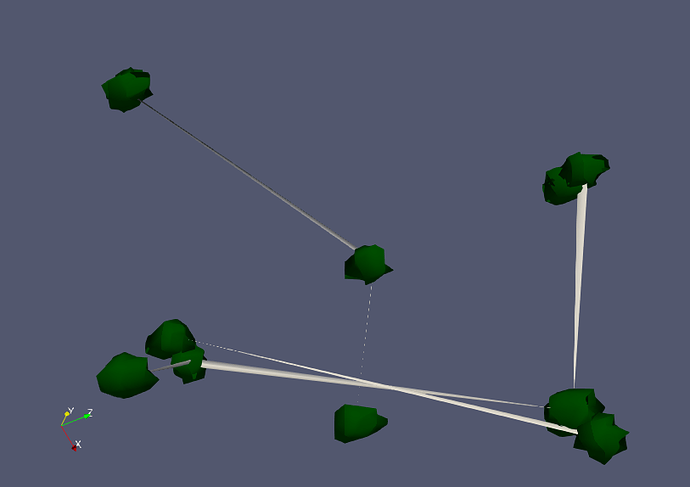 Is a problem of not so good graphic card or there is some tips or trick to make it a pesonable good sphere ?

drudox00,
I don’t know. However, I would guess that this is not a graphics card issue. If possible, please add an example data file, with steps to reproduce the issue.
Alan

I would try running the Transform filter and scaling up the physical space by a large number to get the bounds closer to 1.

oh right ! try this vtk file , using glyph filter and ray of sphere 0.2 try to get a good sphere!

I tried loading your data into ParaView 5.6, and it worked fine. I then tried again in an older version of ParaView (5.2) and saw rendering issues similar to what you report. So my first suggestion is to update to the latest version of ParaView if you can. That might solve the problem for you.

which version did you download ? there is one named “osmesa” … while for the 5.4 there is the openGL version … does 5.6 use openGL ?

I try to download paraview 5.6 but i got the same problem

Does translating the data solve the issue?

No, leaving scale and rotate the same is correct. Are you doing the translate before the glyph? It shouldn’t matter, but it might.

Some other things you can try is to turn on OSPRay rendering. (The option is on the bottom of the View properties.) That will turn off any graphics hardware you have. If that does not change the behavior, then the problem is probably not with the rendering.

I’m doing the transalte over the data ! so before the glyph , I didn’t found OSPRay renderng is in the view menu ??

No sorry I found it !