I am using openFoam CFD package and want to be able to post process the data to give me the regions which have been encapsulated by a user defined iso-contour. Is this possible in paraView?

Simplified 2D Example (Note that my actual domain is 3D):

I deem a region encapsulated if it is enclosed by the 500C isotherm and or the domain boundary and not connected to either inlet boundary by a ‘path’ of cells with temperatures >=500C.

My simulation has multiple time steps, some encapsulated regions may appear in the data for multiple time steps, if so I only need to record the first of these. If they were to appear on any further timesteps these would be within the initial volumes bounds (as would have shrunk in size), so any logic should still hold true.

As can be seen from the image below (the interface between the orange/blue is the 500C isotherm):

Any advice on a methodology or thoughts on the aspects which can or can’t be achieved would be appreciated. 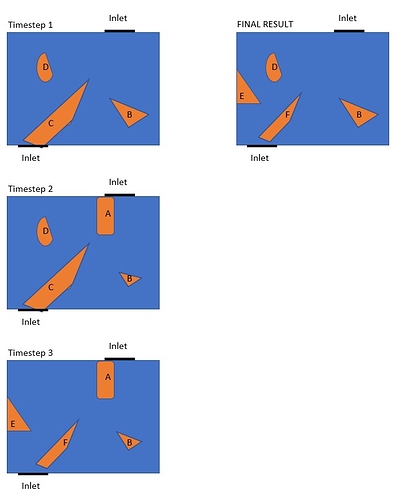 There is no way to do that automatically in ParaView, except by implementing your own filter (in python or C++).

You can do it manually by playing the animation step by step and extracting the contour when they appears.

Mathieu,
Thank you. I’ll have a play with the filters and try and work out the best logic and implementation with some python.