Many Machines PVW launching on Windows10?

Hello，developers:
I hava a question about the link below: 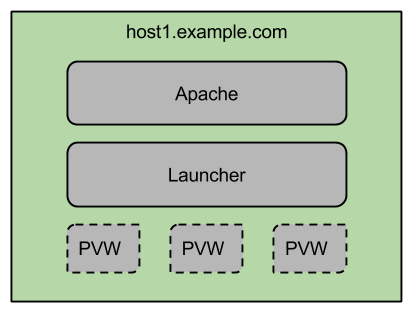 
From the information from above link, I get we can use a special python launcher config method to run PVW within a many machines architecture. I have read through this solution and found out that it seems like shell script can only work on Linux system. Or at least, until now, I cannot find a way to run customScript.sh on windows10 correctly. I know windows has its own ssh client and server (OpenSSH), but how to solve the problem about .sh file running and export DISPLAY？
So I would like to ask, is there a solution to run this many machines PVW launching on Windows10?
jourdain (Sebastien Jourdain) April 9, 2020, 7:34am #2

I’m not a Windows expert in any means, but you should be able to run *.bat script which are technically the same as *.sh with some syntax change. From there, you should be able to use Putty to run job on remote machines. Also, if you have an EGL version of ParaView (for linux), you don’t need to worry about DISPLAY anymore. If you are on Windows, you just need to run the process in a running graphical session.

Thanks a lot for your quick reply.
I believe *.bat is a great idea and Putty is a great ssh client. In fact, I have tried Putty for a little bit, and it is essentially like the Powershell or a cmd console running openSSH. But I only tried to run the paraviewweb application visualizer with pvpython command line rometely…And I got several errors from vtkWin32openglrenderwindow, such as [Failed to Initialize GLEW. Missing GL version].
So it seems like I really need a graphical session to run the pvw process? May I ask how to start a graphical session on windows, the only idea from me is using remote desktop which maybe too heavy for this solution…

Having *.bat file and Putty was the way to have 1 launcher to start pvw processes on remote machines.
Ideally those remote could be linux so you can use EGL version of ParaView.

The Launcher just run a command line. That command line could be a .bat script that execute a command remotely using putty. The pvw process does not need to be collocated with the launcher.