I have loaded a 3D grid model using a custom reader. When the model is loaded in paraview the mouse interaction is totally different than when I load the same model in pvpython.

I would like to have the same behavior of paraview mouse interaction done in pvpython which is:

Any idea how can I do that?

Welcome to the ParaView community, @qasimta.

You can customize mouse bindings in the settings. Edit menu → Settings, Camera tab. 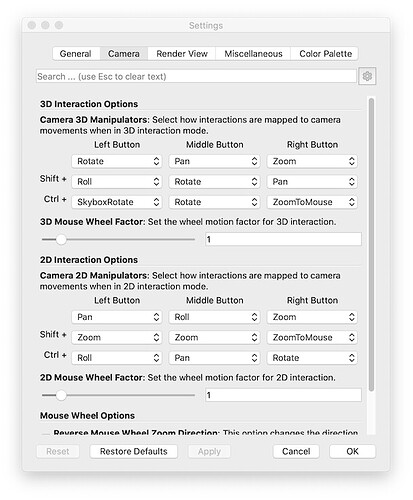 Thank you Cory for the information.

I wanted to do that programmatically using python and I got the code on how to do it from the tracer.

I suspected that it has to do with the CenterOfRotation settings, and I tried setting it to the same value of the CameraFocalPoint.

how can I get the values of the center of the model.

s.GetDataInformation().GetBounds() gives you the bounding box around your data where s is your data source.

Thank you very much for the help. I did set the CenterOfRotation to the center of the model. It didn’t work but I realized later that I was scaling the object in the Z direction so I had to multiply the z location with the same scaling factor. Finally, it worked.

Thanks again for the help.

I just wonder, are there any documentations for python APIs.