I am having problems when using parallel post-processing with the mpiexec utility. The issue is that I cannot make paraview plot graphs when using multiple CPUs. At the beginning it wasn’t a big problem because the simulations were quite light but now I am switching to heavier simulations and this is delaying significantly my post-processing. Here I leave an example of how I call paraview with mpiexec with a single and multiple CPUS 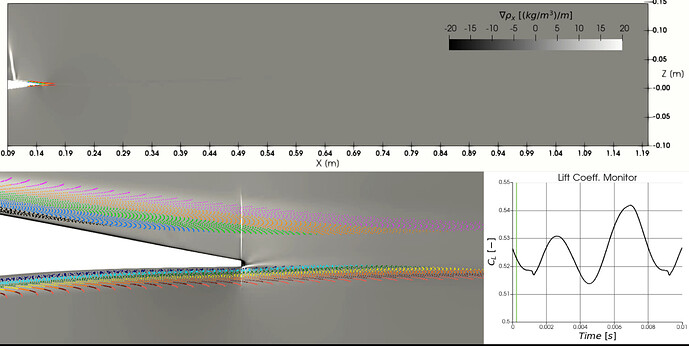 I have noticed that when using multiple CPUs the graphs are not plotted (in this case the Plot Data Over Time filter) and that the axis title labels (X(m) and Z(m)) are thicker like if there were several characters overlapped.

I would like to know if there is an specific command for the mpiexec utility to control which CPU takes care of each process because it seems that the CPU are failing to communicate properly.

Thank you in advance!

Thank you so much for you quickly response. I think that the problem is not in the script since it works perfectly fine when using 1 CPU. Anyways you have here my script :

Since I was addressing to “cl (stats)”, nothing was plotted in parallel because the variable is named now “cl (stats rank=0)”.

Which filter generate this output ?

The Plot Data Over Time filter. My data is named x,z,cd,cl etc… but this filter adds the (stats…) extension.

This filter was reworked very recently by @Yohann_Bearzi , so maybe this is fixed in master already.