Obtain information if proxy is visible

Can anyone tell me how I can have my paraview batch script find out if an object is visible or not?

Here is a small example:

I can Hide the source's display with

but where is the objects display status actually stored?

where is the objects display status actually stored?

You can use display.Visibility to check whether the representation associated with source is visibile.

I had tried that, but it didn’t quite work reliably.

I think that there is a bug and here is how to reproduce it: 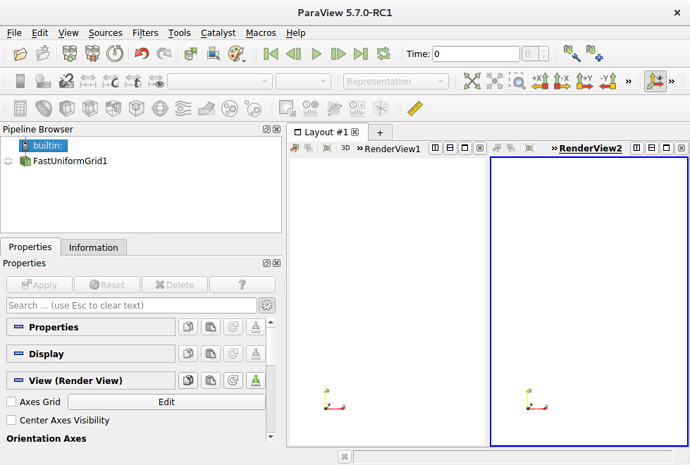 Okay, this is a little subtle, and has to do with representations being lazily created.

The behavior arises because the mechanism for creating a representation is to call Show() (realy ts equivalent deeper in the ParaView libraries). We could potentially separate the representation creation from showing it and call the creation function if needed in GetDisplayProperties(). There may be some technical difficulties doing that that I am not aware of, but it’s a possibility.

The behavior is still present and it’s really annoying when working with multiple render views.

Have you encountered this issue, @wascott?

No, but I haven’t tried. I will run through these examples after our meeting.

Man, this one was interesting. Definately down the rabbit hole for me.

My $0.02 is that this is a very rare bug with a workaround. Should be fixed, but probably low on the queue. @cory.quammen, you agree? I know how to replicate it now, want me to write it up?

@bastian This is one of the best bug reports I have seen. Thanks for the time writing it, and well done.

Should be fixed, but probably low on the queue. @cory.quammen, you agree? I know how to replicate it now, want me to write it up?

I agree, it should be cleaned up, but priority is low. If you could write it up @wascott, that would be great.

I had the same problem. Maybe these will be helpful to someone.

after which listing visible sources may be done without any problems