However, Paraview immediately crashes when started. I’ve seen two slightly different types of crash. Most of the time, I briefly see the Paraview window appear, but then it disappears almost immediately. Occasionally, Paraview stays open, but as soon as I attempt to move the render scene with my mouse, the program crashes (window disappears).

I suspect this may be an graphics issue. I am running with an AMD Radeo RX560 with up-to-date drivers (version 18.7.1). Is this configuration supported, or do you only support nVidia cards?

Any help is greatly appreciated.

Paraview 5.x releases are very unstable in Windows, especially with Intel graphics. You can try beta builds, which are compiled in a bit different way. Or Linux release.

ParaView does not require a particular graphics card vendor. However, the IndeX volume rendering plugin uses CUDA, which does require an NVIDIA card. That plugin is not loaded by default, so that shouldn’t be causing the crashes you are seeing.

Could you look in your system’s event logs and report anything related to ParaView? To do this, see these instructions.

It does not require, however my 2 years experience of fighting with 5.x “releases” tells me that Intel HD graphics is certainly less compatible with paraview than, say nVidia graphics, under Windows. You have to agree, that even unintentional, software/API incompatibilities happen quite often. And I don’t know how many intentional “landmines” proprietary developers lay around. Remember the history of Microsoft; and Intel isn’t new in this either, cheating and segmenting drivers by market niche.
So, my suggestion is to try beta build (with different compiler, or set of tools), or move to linux. I stopped at beta builds.

Appreciate the comments. I ended up rolling back my graphics driver to AMD Radeon to 18.5.1. I also went back to a slightly older release of Paraview and things are working.

I’m sorry I didn’t get a chance to check into my system logs. If/when I re-upgrade my drivers and Paraview version, I will try to look into it.

High there I have installed paraview on windows. it display the following message before crash.
please help 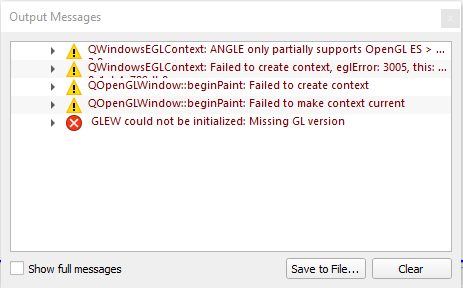 Update/Install your grahic drivers and open your own topic if you have issues.