I am using paraview on ubuntu cloud environment. Nvidia is selected in additional drivers list and ubuntu is recognizing nvidia but paraview is not showing me nvidia in openGL version. I tried reinstalling from https://www.paraview.org/download/ as well but it still does not use nvidia. 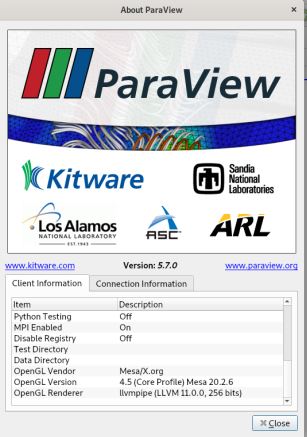 what is the output of glxinfo ? What do you mean by “Cloud Environnement” ?

Hello Mathieu! Thanks for your reply
I meant I’m using paraview on remote server. The output of glxinfo is attached.
glxinfo.txt (116.2 KB)

glxinfo does not find your nvidia driver. This is not a ParaView issue.

I’m using azure instance. When I used nvidia -smi, it gave me output that shows GPU is present. I also selected NVIDIA in additional drivers in ubuntu instance. Thanks for pointing out, I will contact my service providers

Hello Mathieu!
I had contacted service providers and according to them, GPU is being utilized as shown in attached screenshot. 66MB is used after opening a simulation in paraview. But glxinfo still does not show nvidia; it still shows X.org. Can you please guide if it’s a paraview issue or not. Thanks!

This screenshot shows that Xorg is using your GPU. If glxinfo does not find your GPU, then it is not a ParaView issue.

This is not a paraview issue.

Which Azure instance is it?

From your screenshot of nvidia-smi, I see it is a Tesla T4, so my guess is you’re subscribed to an NC*/ND* series instance.

Those GPUS are T4 or V100, both of which do not support Nvidia’s virtual GPU and only meant for CUDA/ML purposes, hence you don’t get display to recognize GPU. For a list of supported instances, check this doc!

I must warn you that NVv3 series is very hard to find but pretty cheap… Too many cloud gamers ahhh.

Hi Jaswant!
Thank you so much for your reply. We are using NC4as T4 v3 on Azure. Our problem is that the T4 graphics card is not being utilized by Paraview. We found an instance on Azure with M60 GPU,named NV12s v3. Would it work with Paraview? Kindly guide.

We found an instance on Azure with M60 GPU,named NV12s v3. Would it work with Paraview?

I do not have expertise with setting up linux machines in the cloud for GPU accelerated visualization. I think it requires VirtualGL and NoMachine here or a remote desktop viewer here. Please ask azure support or try the links

I will ask our service providers. Thank you so much!