ParaView Parallel pvserver (MPI) - Problems when running on a Cluster

Hello all,
While learning how to use ParaView on clusters, I have encountered an issue with making it work in parallel.

There are two issues on two different nodes/hpc-clusters, but I will begin with a more general one in this post.

While in serial, everything was fine (running interactively, with a GUI), however, issues started when connecting to a parallel MPI paraview server (pvserver), giving this error:
Socket error in call to bind. Address already in use, Failed to set up server socket
… although the port I was using did not seem to be used when I checked with netstat -ntlp

I have since read many forum posts about this, namely:

However, since I am a new user on a cluster, I really cannot reinstall or recompile ParaView. I have no idea if ParaView was compiled with MPI or not. What I managed to find was the libvtkparallelcore.so, which might or might not indicate anything.

Then I saw some posts to check if that is even a problem, namely, check if PARAVIEW_USE_MPI is enabled, however, I have no idea where to even look for that PARAVIEW_USE_MPI variable! If it is a CMake variable, I have not been able to find CMakeLists.txt or anything like that on my system.

Also note, that remote connection works on its own (when not using MPI, with just a pvserver). That is key, as the ParaView User Guide states: “To leverage parallel processing capabilities in paraview or pvpython, one has to use remote visualization” (- from 5.10.0 paraview docs).

Hi Dosmi,
I suggest you to download new version paraview and “install” is very simple, just download and cd to bin directory and launch the executable pvserver, just it.

For you question, you can check from paraview menu: Help–>about dialog: 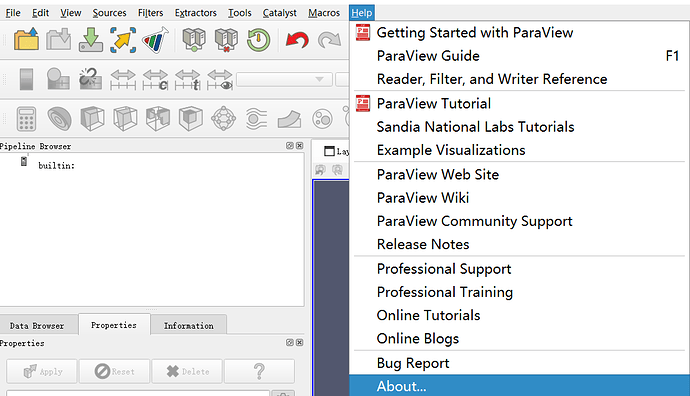 Then from popup dialog, you will find “MPI Enable” tag:

Thank you so much, I can see the problem now Help → About → Client Information - MPI Enabled is OFF, which explains my problems! Unfortunately, I don’t think I can download a new ParaView version and install it on my cluster, as I am not the administrator. Is there a way to turn on MPI Enabled without recompiling/reinstalling?

Related to this, is there a way to see the VTK_SMP_IMPLEMENTATION_TYPE on currently installed ParaView? (not looking at ccmake, as I do not have access to that)

Is there a way to turn on MPI Enabled without recompiling/reinstalling?

I’m afraid not. If you cant use our version from paraview.org/download directly, you will have to check with your IT.

is there a way to see the VTK_SMP_IMPLEMENTATION_TYPE on currently installed ParaView? (not looking at ccmake, as I do not have access to that)

Yes, in the same about dialog, but only since ParaView 5.10.

Anyway, you need to update this old ParaView, check with IT.