The basis of the original Prism application was two linked views that helped scientists view simulation data and equation of state (EOS)[1] data interactively in the same application[2]. This side-by-side viewing and interacting with both geometric and material state data is the general use case that a Prism capability in ParaView should support.

The main contributions of this tool that should be replicated in a general Prism capability in ParaView are:

A general Prism-like capability in ParaView should take advantage of the multi-view, multi-dataset, and the pipeline browser to connect inputs/outputs and provide a scientist with a flexible way to define which the data that is shown in the linked views. This proposal assumes that any VTK Dataset output can be linked to any dataset input for the 3D surface, as long as that dataset makes sense to the input. This means that with a generalized capability, the 3D view can be used as a comparative visualization element, so a scientist can study any combination of inputs. Novel contributions of a general Prism capability in ParaView include: 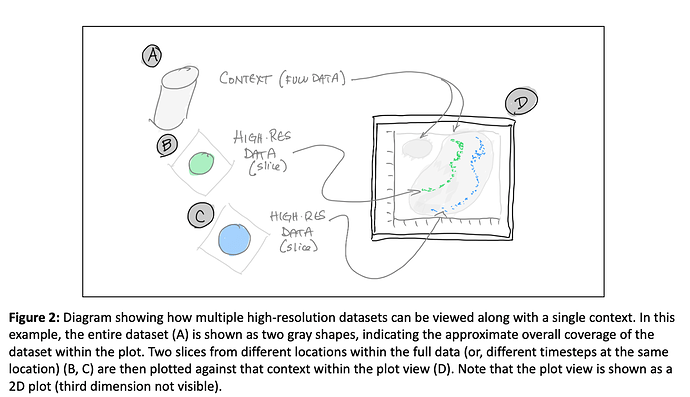 We note that simplicity is critical for useability. Though the components can provide a flexible way of viewing and comparing several datasets at once, the implementation in ParaView should be as simple as possible, with defaults defined as components are hooked up in the normal paraview manner (adding filters, showing elements in views, etc.), so that as few steps as possible are necessary to hook things up with default behavior. Expert users can use the capabilities for more advanced viewing if that is needed.

The new element required by the Prism capability is a view of a linked 2D/3D plot, which takes inputs from filters in the pipeline, and whose output is linked to the input data so that selection/highlighting works across views. In our experience, scientists need fine control over the scaling, coloring, axes (limits, etc.) in order make useful plot views. Note that they are used to being able to plot things with matplotlib and other packages, and are used to having fine-grained control of plots.

The plot view is a specialized graph that shall contain:

Input Data Shown in the Context of the Plot Surface

Input data shown in the context of the plot surface must be transformed to the coordinate space of the plot. This requires controls or metadata that

Input data linked to the plot shall include the following representations, to most effectively show a subset of data within the context of a larger set of data. We note that multiple inputs (high resolution and contextual data) can be mapped to a single plot surface, and the components should be designed to support this.

We note the following about plot views:

@Kenneth_Moreland Adding you Ken, as ORNL may be interested, and you are always the brightest bulb in the room…