Pvserver running on EGL crashes whenever LateX typesetting is used

Hi,
I’ve got a pvserver running on EGL renderer. For the caption of the colormap I wanted to put some mathematical symbols with LateX typesetting. But as soon as I hit apply, Paraview crashes. But the same doesn’t happen for pvserver compiled to run with OsMesa rendering. What is causing the problem and how to address it?

@ben.boeckel : Don’t we have a EGL buildbot running all the tests ?

Found it, but it is not running tests, should it ?
https://open.cdash.org/index.php?project=ParaView&filtercount=1&showfilters=1&field1=buildname&compare1=63&value1=egl

It’s a superbuild. We’d need a normal builder for it. It’ll likely come with gitlab-ci when that happens.

I used paraview superbuild (version 5.7 of paraview) to compile pvserver on a Cray system. I have two flavors of pvserver one using EGL rendering and other using OSMesa. Paraview crashes whenever LateX typeset text is entered in EGL flavor but not for the OSMesa one. I can share any file or details that can be helpful to fix this issue.
Edit: I found that the crash happens whenever I load a large size VTK (around 50 GB). However, this issue doesn’t happen for cpu rendering with OSMesa. Do you think it is some memory issue? Here’s the memory map for the small size data running on EGL server where LateX typesetting is working flawlessly. Can you suggest a fix? 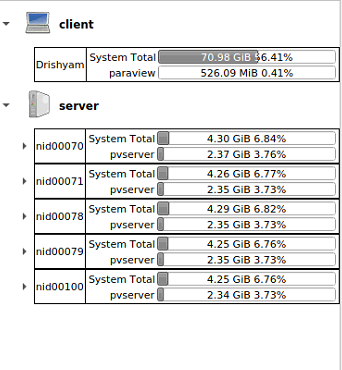 @ben.boeckel @mwestphal can you please comment on this?
I converted the vtk data file to pvd format (pvti wasn’t available for large datasets). The dataset size is around 50 GB per file.
On the loading the converted pvd files, I noticed that the interface of Paraview was much smoother and fluid and the data io and data processing was much faster compared to the vtk files I was using earlier. Some of the crashes of the pvserver that was happening in some scenarios for the the large datasets for example when using LateX typeset annotation as I described earlier in this post also got resolved.
(Thanks to the Nvidia IndeX team for suggesting me to try pvd files)

Sorry, that’s not clear. Are you having an issue with EGL or with vtk data ?

In any case, a.pvd file will always load faster than a .vtk file. Once loaded, it should not impact anything (except when chaging time steps, which include reading from disk).

However, these crashes doesn’t happen when either

I was also discussing this issue with the Nvidia IndeX team as IndeX rendering in cluster mode was what I was interested in (requires EGL Paraview server) and this is what they had to say:
“We looked into this a bit further and found out that this is actually caused by a limitation in ParaView when it comes to the VTK file format. Data loaded from .vtk files will not be distributed to multiple nodes by ParaView, which is incompatible with IndeX and of course also not very useful if you want to render large data in the cluster.”
I also noticed that the io and response of the client is much smoother when using the converted pvd files.