I have just installed Paraview v5.6 on my Windows PC and transferred some exodus files from my Macbook to open on the PC. When I try to open the exodus file it tells me it can not find the reader, and the list that prompts me to select a reader does not have Exodus listed. Does this additional reader have to be installed through some other external source? I used the msvc-64bit.exe to install this version of Paraview. This same version seems to have the Exodus reader in the installation on the Mac. Does anyone have any suggestions as to whats going on here?

Totally amazing. This bug has stayed hidden for the last few months, but has appeared three times now in the last week. The bug is written up here; https://gitlab.kitware.com/paraview/paraview/issues/18711. It is scheduled to be fixed in the spring release (out sometime in April or May).

Either roll back to ParaView 5.5.2 (a real workhorse), or try running on Linux.

Oh, do you have a small file that you could give Kitware? The two examples so far are around 5 GBytes in size.

I actually ended up rolling back last night and it did work out fine. I have some larger files with time dependence, containing vectors and scalars. Would 11GB be too large? I may have something on the order of 5GB laying around as well. Would be happy to add it to your test library.

5GB is still a little big for transferring. Before sending data, let’s see if we can resolve the issue already reported.

Seems like this bug is still around on Windows 10 install. I get the “reader for… could not be found” when trying to open files larger than 2GB on windows installs. The same files opening just fine on a Linux build. 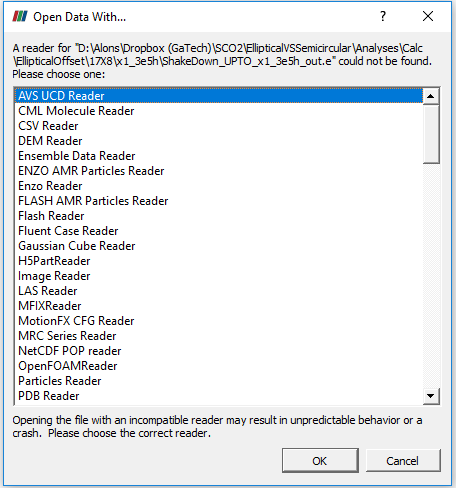