As I work to put a ParaView scene into an HTML page, I’ve encountered another issue, which is that when I use the advanced option to embed a Glance/vtkjs export into a ParaView Glance base HTML, I’m not getting the actual data view.

I do get part of the side control options, but even that seems to be not rendered as expected (see embedded image – I hope). 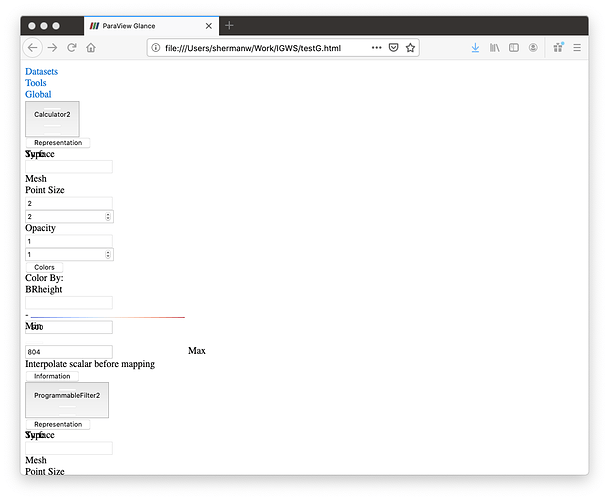 Okay, so my problem above was a case of: user error. For some reason I was thinking that the generated HTML file could just be read as a basic file, so I was reading it apart from all the helper JavaScript code without any server-side support. So I went back and found where I’d installed “paraview-glance” from git – and actually did a new “git clone” on that to get the new version. Did the “npm run dev” command and now it works!

But I do have a followup question, which I’ll chance by asking in this thread since it’s related:

What is the process by which I can take a .vtkjs zip archive and put it in the HTML container normally created by the Advanced vtkjs export? I presume I would do something like uuencode the zip file or some part of it, and maybe it’s just as simple as that.

I ask because if I have to tweak the .vtkjs zip archive (e.g. to rename some of the pipeline elements), then i’ll want to embed my tweaked version into the HTML container.

Hi Bill, we were working on that issue yesterday as we were aware of it. ParaView Glance 4.4.2 solved that issue and I’m going to update the superbuild to bring that version into ParaView 5.8 bundle.

In the meantime, you need to download that standalone HTML and use it to embed your data while using the exporter.

That version of Glance also handle the textures that have been exported via PV 5.8.rc2

Just did that export with 5.8-RC2 and Glance 4.4.2 which show proper names along with the texture. 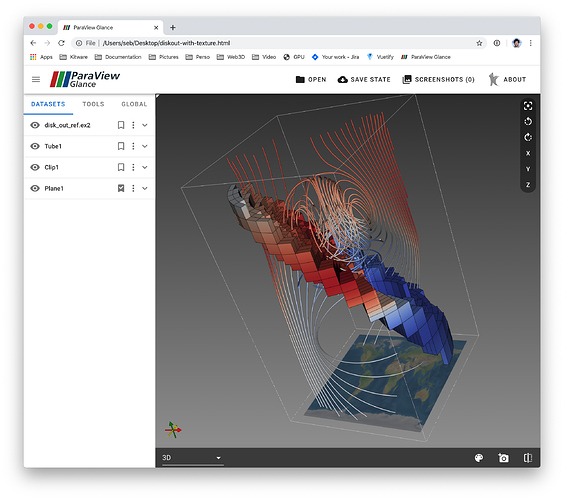 My primary problem was thinking that I could just do open-file on the HTML file, and of course that was a bad assumption.

I did use the 5.8-RC2 version of ParaViewGlance.html for my current work, and that works fine.

But what I’m still wondering is, if I then tweak the .vtkjs file, how can I then take that modified vtkjs file and put it back into the HTML container?