I’m using ParaView v.5.10.1 in client/server mode with EGL for hardware-accelerated offscreen parallel rendering of large datasets. The server is running on a cluster of compute nodes with multiple processes communicating via MPI. When I connect to the server and create some arbitrary geometry (like a sphere), the data is partitioned across the different processes. So far so good. The Remote Render Threshold is set to 0 MB, so I expect the rendering to take place on the respective processes and IceT to compose the final image that is sent to my client.

However, the connection information tab in the About dialog says IceT is ‘Off’: 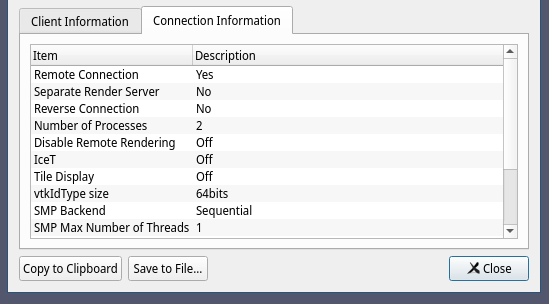 The advanced render information however says that remote/parallel rendering is on:

As far as I understand the documentation, IceT is the default library for this kind of compositing and I’d assume that it is used here - but why would the About dialog say it’s ‘Off’? Taking a look into the code I assumed that VTK_MODULE_ENABLE_ParaView_icet controls the usage of IceT (and by extension the flag in the About dialog) and I explicitly enabled it when building ParaView from source.

Can anyone point me in the right direction whether I’m actually using IceT right now (because I don’t know what to believe anymore) and how I would go about enabling it if it is indeed turned off?

icet is actually used, the server information is incorrect because of a missing module dependency. Fix is here: https://gitlab.kitware.com/paraview/paraview/-/merge_requests/5955

Merged in master and soon merged in release, will be fixed in 5.11