Is it possible to construct an animation of complex vibration modes? Obviously, the actual shape is described by a real field, composed of a real part and an imaginary part of a vector V:
v = ReVcos(at) - ImVsin(at).

Has anyone done this? Got any pointers?

At first I was going to suggest using Python Calculator, but due to a bug I just found, I expect that won’t work for you.

Here is an example state file that creates some fabricated data with real and imaginary components and then applies a Programmable Filter to animate the vibration: vibration-animation-example.pvsm (583.1 KB)

Many thanks, I will give it a shot.

Where do I find this RequestInformation script text box? I don’t see where to input this.

Press the Toggle Advanced Properties button and the RequestInformation Script text box will appear after the main Script box. 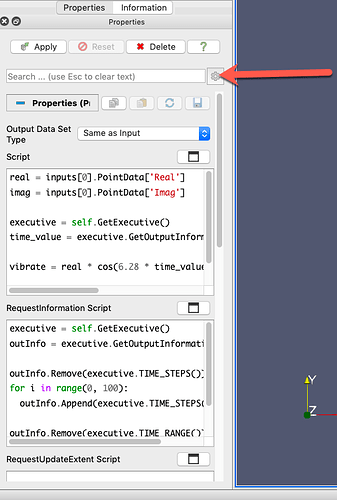 Many thanks, I realize it was an embarrassing question.

But in all my years of using paraview I’ve never once needed advanced properties, and I had no idea what the gear was for. 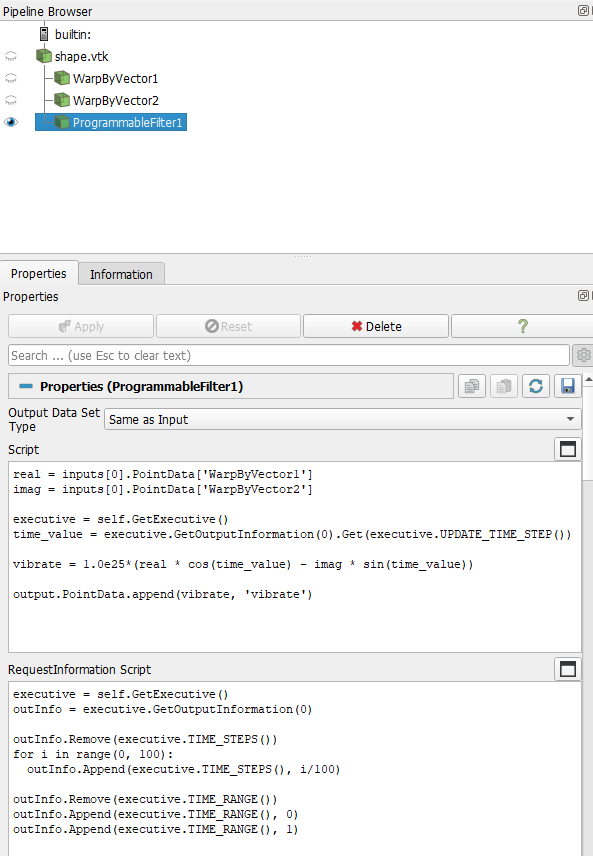 The output of this Programmable Filter will just create a field named vibrate that will change over time. If you want to use the vibrate field as displacements to change the shape, you will have to apply the Warp by Vector filter.

Perfect. That makes sense. Thanks!

Many thanks for your help!

Thank you so much for this discussion, and the code.

I want to do something similar. However, I want it to work as a “representation”, like the one described in the following link:

I’ve been reading, and I’m thinking on doing the following:

Am I in the right track?