When I try to load .RAW data into ParaView, I run into an issue where ParaView does not load all the data (usually about half). I don’t believe it is necessarily the size of the data, because I have used other Computers to visualize the data. I have tried enabling OSPray and there is no change.

Each time Ioad data, I receive the error message:

If anyone knows what might be going on, I would really appreciate your help.

Just as a wild guess, are you loading double data as float (or vice versa)?
Alan

I don’t think that’s the issue, because my data is float-32 and I’m selecting float as my data type. Thank you for your input though!

I have used other Computers to visualize the data

Could you elaborate? Did you use ParaView or another visualization program on the other computers?

How did you produce the RAW file?

Sorry for taking so long to reply Cory. Anyways, I have used ParaView on these other computers to visualize the data. I have tried by the same version (5.6.0 64-bit) as well as previous versions. To produce the RAW file, I used a python script to generate a 3D volume from a stack of images. I have multiple data sets (ranging from 0.5gb-7.5gb) and see a very similar result on all of them–only being able to visualize about 50% of the data. The weird thing is, however, ParaView isn’t even recognizing the other half of the data (data range is 50% of what it should be when I use data of type int). Initially, I was thinking that it might just be an issue with that data sets being too large to visualize, but since I have been able to load the entire volume on a different machine, and the fact that ParaView is only reading half the data on my machine, I have concluded this is not the case.

I have tried resenting the ParaView settings to default, as well as completely uninstalling, then reuploading ParaView. At this point, I am almost convinced that the error is due to some setting on my computer.

My guess is you are hitting a file size limit on Windows. You should be able to load up to about 2GB before running into problems. But you said the 0.5GB file was also giving problems on Windows?

Hi Cory,
I am running into the same issue. Only part of my image is loading. The image set is 12 gb and I am using Paraview 5.8.1 in windows 10. Is there an upper limit to the data that can be visualized in Windows? And is there a way to increase that limit? 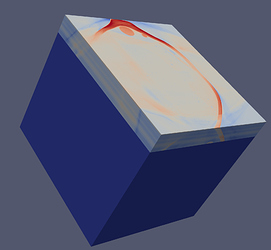