Is it possible to adjust the angular range of the cylindrical or spherical clip region directly in ParaView? I wish to create a visualization like the cheese wheel with a wedge cut out to reveal the inside. 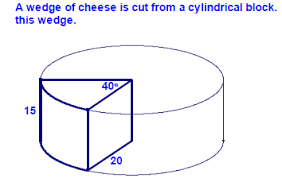 For a single visualization, this should be possible by masking the data, but it would be great to be able to explore different angular parameters continuously.

Not possible afaik, but that seems to be a simple addition to the cylindrical clip.

@utkarsh.ayachit @cory.quammen @Kenneth_Moreland Think this should be added to the clip filter? How valuable would this be?

Shouldn’t be hard to implement. Can’t speak to the value, but it seems like a reasonable clip type to want for certain applications.

If the data is already cylindrical, isn’t this simply a clip using 2 planes?

I’m not sure implementing this is very easy. The way clip works, you are likely to get errors at the point of the wedge, especially for acute angles. Also, manipulating this would suggest a whole new 3D widget, which would not be trivial to implement.

As @utkarsh.ayachit said, using a sequence of a cylinder clip and two plane clips would give a more accurate wedge clip than trying to do it all at once.

Right, we already do multiple clips for the Exact option for box clipping - this would be similar. I didn’t think about the need for a new widget, which could be a fair amount of work.

I don’t think we need to add this as a new mode. Just adding 2 clips gets the user what he wants. There won’t be any performance benefit to this against having the two clips being added internally in the filter anyways.

Agreed. Not one of my best ideas. Carry on, team!

Just to provide some real-life settings

@utkarsh.ayachit, in one of @Patrick_Xian’s examples (figure 5 in the arXiv paper) there is a wedge removed from a cylinder rather than remaining. How do you create a clip like that with 2 plane clips? 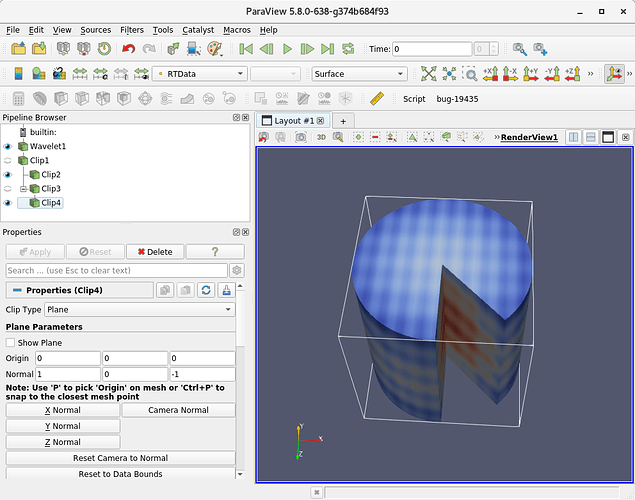 Here, the Clip1 is only used to generate the cylindrical data from Wavelet so can be removed if your data is already cylindrical.

Thanks, @utkarsh.ayachit, this looks awesome and I can change the wedge angle as well!

Is it then possible to combine Clip2 and Clip4 and export a single clipped volume dataset (in whatever format, but ideally vti or tiff)?

Create and apply Append DataSets after selecting the two filters in the Pipeline browser. Then you can save the data out as a .vtu.