I have something scripted in python that outputs a matrix of custom dimensions (usually 2000x1000) that represent the velocity field.

Now would be cool to use paraview to generate LIC pictures from these fields, and I see two possible ways:

Would you maybe have any suggestions? I am a bit concerned about the second options because it would become maybe too slow to generate huge amounts of data

you’ll always need at some point to convert your custom matrix to a VTK data structure if you want to use the Surface LIC classes. Now you can either :

You shouldn’t need to worry about the size for a simple 2000x1000 matrix except if you’re on a very old laptop, this is still a small dataset

Thank you for your inputs!

What I could do in the meantime is to get a source plane in vtk with as many points as my matrix, get the points as a numpy array and then do operations on them.

Are there any examples on how to manipulate point data and shove it back in the vtkPolyData object then?

It seems that the LIC works on point data and not cell data, so maybe it has more sense to build the matrices with points, do the operations and then create the surface with like a Delaunay2D?

EDIT: Programmable Source: Vorticity and gradient from numpy data - ParaView Support - ParaView
Something like that could maybe work, I can’t run the code yet, but seems like a good start

What I could do in the meantime is to get a source plane in vtk with as many points as my matrix, get the points as a numpy array and then do operations on them.

Are there any examples on how to manipulate point data and shove it back in the vtkPolyData object then?

I don’t think there is (or at least not to my knowledge), because this is an unusual operation : since ParaView is supposed to run on remote (and possibly multiple) servers, memory management from a paraview script is not trivial.

I think the cleaner way of doing what you want is to create either a Python Programmable Source or a Python plugin. Here’s some doc about the programmable source 13. Python & Batch: Python Calculator, Programmable Source & Filter — ParaView Documentation 5.10.0 documentation , and an example of a python plugin https://gitlab.kitware.com/paraview/paraview/-/blob/master/Examples/Plugins/PythonAlgorithm/PythonAlgorithmExamples.py .

For example you can create a Python Programmable Source, copy paste your script that creates your data and convert it into a VTK object into the programmable source, and you should be good to go

and then create the surface with like a Delaunay2D?

Using a Delaunay2D seems overkill here. Maybe I didn’t understand what you’re trying to visualize but as I said in the beginning of my message a vtkImageData should be able to represent matrices quite well.

I could get more or less what I wanted by using the following pipeline:

Basically I calculate my velocity fields with python, export them as a cfd file with the columns: x,y,z,u,v,w for the points and the velocity and then parse them. Then I recompose the velocity vector by running the calculator with uiHat+vjHat+w*kHat

Proabably there is a way more efficient way to do it, maybe exporting the velocities in the correct vectorial way (which I didn’t found) and using the TableToStructured filter which I couldn’t make work sadly

Glad that you made it work as you wanted ! Indeed this may not be the best way since you’re wrinting your file to your disk. If you want to improve your workflow further consider the solutions I’ve mentioned in my previous answer.

Also if you have multiple timesteps for your velicity field, know that you can export your CSV files as timestep1.csv, timestep2.csv, timestep3.csv, … and when trying to open a datafile ParaView will group them and import them as a temporal dataset (see 2. Loading Data — ParaView Documentation 5.10.0 documentation).

Yes I will definitely try your way as well and update the thread just in case someone else needs it!
I think the biggest difference in our approaches is that mine creates the points at first and then does a Delaunay to get the grid. I found a tutorial by westgrid here which was helpful on creating sources but I couldn’t yet get it right

May I see an image of your dataset with the representation Surface with Edges (or even the csv file if you’re ok with sharing it publicly) ? I think I’m misunderstanding the layout of your data

I could easily change it in case, this was made specifically to work with the pipeline I sent before

I think the biggest difference in our approaches is that mine creates the points at first and then does a Delaunay to get the grid.

you do not need to define any points or use a delaunay2D. Since your points follow a uniform grid pattern, point position can be implicitely defined and this kind of structure corresponds to a vtkImageData.

For an example of how to create such an image data from a numpy array see 4. Programmable Filter — ParaView Documentation 5.10.0 documentation . The paragraph actually explains how to create a 3D vtkImageData, but it’s mainly the same for a 2D image. The only thing that will change is the shape of your numpy array as well as the WHOLE_EXTENT (Z extent = 0 in your case)

Thank you a lot!

Can confirm that it works even with the programmable source, seems even way faster!

The example code needed only some small changement, the dtype is actually very important and should be set correctly to the datatype, it took me half an hour of debugging to understand it 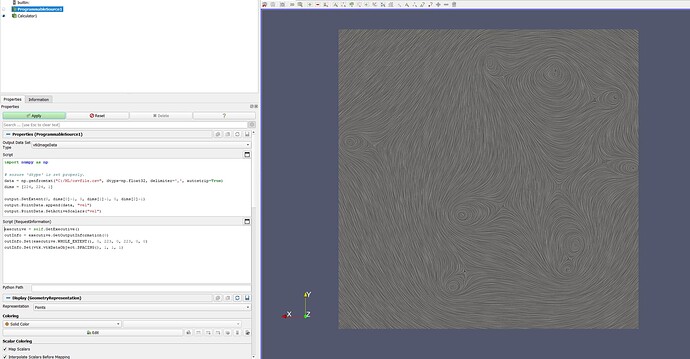 Now I am pushing the components of the velocity vectors as scalars and then reassembling them in paraview with a calculator. Is it maybe possible to append the vector directly? Starting from numpy arrays I can’t really figure out in which kind of structure they need to be manipulated in

Using the csv you sent me earlier and the following code, the data was directly interpreted as a vector field

what version of ParaView are you using ?

It is because you’re talking in term of VTK filters while we are in the ParaView world. I suspect you don’t need vtkImageMapToColors or vtkPNGWriter at all when in ParaView. Please open a new topic explaining the full context and what you’re trying to achieve exactly.

You can tag me if you want

Thank you @timothee.chabat I already did because I thought it was a complete different topic, although I think I might not have used the right terminology also in that post…

You can find it here