Hello,
I got the executable file (paraview.exe) by building the latest ParaView source on Windows. However, when this file is executed, the following output message is displayed.
Why is this output message coming out?
Is there any way to get rid of this message? 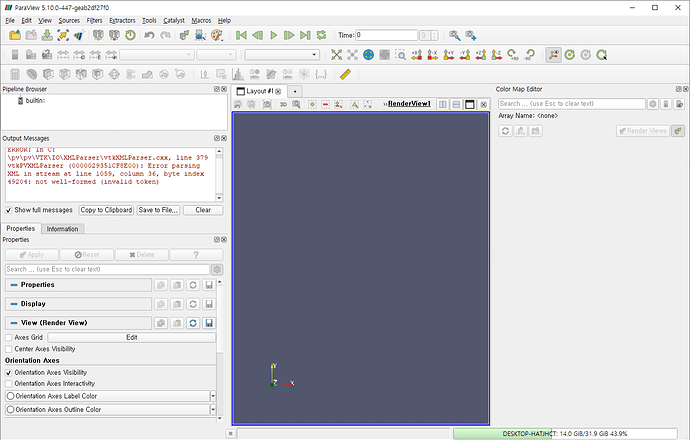 Is your ParaView fonctionnal ?
Any reason not to use the binary release ?
Which CMake option are you enabling ?
Which commit are you building exactly ?

Check your source code. Are there conflict markers or some such? Seems to me that the source code is not clean.

What size is your XML file?

ParaView’s function seems to be working fine.
The reason not to use binary release is to customize ParaView’s Menu and try it out.
The cmake option turned on PARAVIEW_USE_PYTHON and PARAVIEW_USE_MPI, and CMAKE_BUILD_TYPE was set to Release.
The source code commit used for the build is as follows.

This is the output message generated when the executable file is executed. I did not enter any xml file.

What does the call stack show?

Only the output message is shown, the call stack is not visible. This is because it is a release mode executable.

Then I suggest you build RelWithDebInfo and put a breakpoint in vtkXMLParser::ReportXmlParseError

Thanks for telling me how.
Is it possible to set breakpoints in visual studio?

Yes.
Just click in the left most column of the IDE at the desired line of code. Then right click on the Paraview project in the Solution Explorer “Set as StartUp Project” and run “Local Windows Debugger”

It helped a lot, I’ll try it and post the results.

The call stack is:

What is the value of the xmlcontent parameter in vtkSIProxyDefinitionManager::LoadConfigurationXMLFromString() when your locale setting is English vs Korean?

Depending on locale, the xmlContent value is: 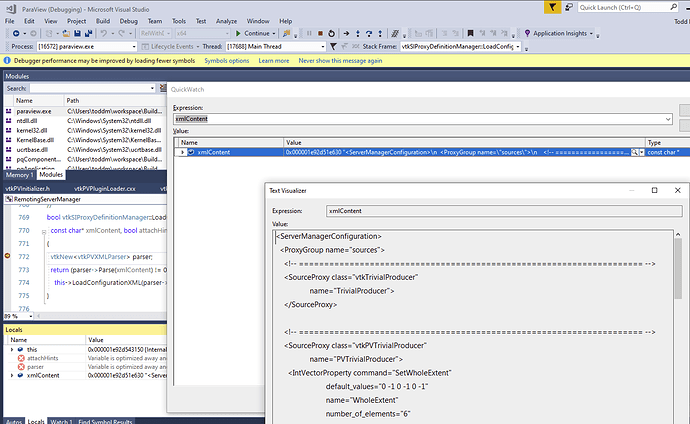 As mentioned in the output message, when locale is korean, broken characters are found in line 1059, column 36 of the xml file.
I don’t know why these broken letters went into this place.

That XML file contains a non-ASCII character where a hyphen should be.

Do you see the difference? Now regenerate with cmake and try again.