Every part is important but the following section is where you allow Apache to read that file assuming that file get written here /data/proxy.txt not /home/steven/ParaView/proxy.txt and by the pvw-user not steven.

If you follow the documentation, everything is supposed to work. If not, I just need to figure out which section you skipped…

So the key point is that, I should configure all the process in a user account but not the root user account? And then it will work as expected.

Thank you very much for your nice reply.
I have been success finally by following the doc instruction, yeah~ 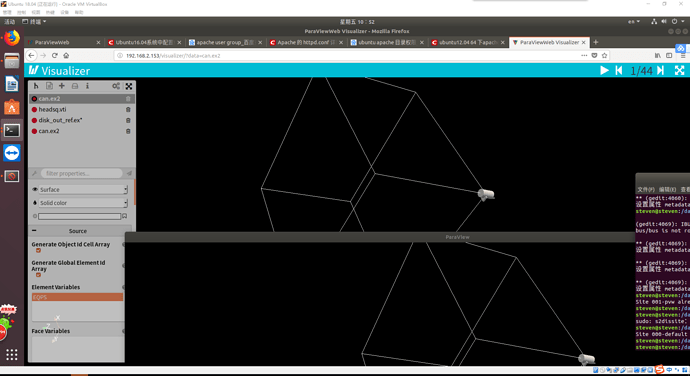 image.png1920×1048 258 KB
BHW, if I want to develop our own website for large data web visualization, I should refer to the open-source project of Visualizer, lightviz or the arcviewer in github?
That means I just need to develop a customized “visualizer” to replace the default bundled visualizer in paraview?
yancheng (yancheng) August 17, 2018, 5:49am #26

Then I try to configure paraview 5.5.2 in the same way, but it does not work.
I find that in 5.5.2, there is no vtk/web/lancher.py path, so i use the wslink/lancher.py 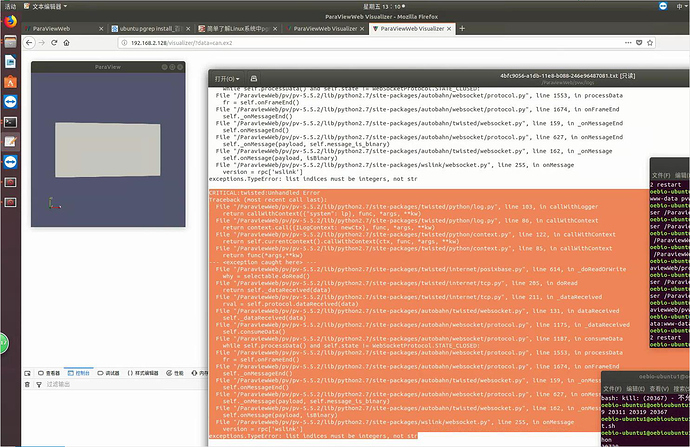 ParaView 5.5 needs to be patched like I mentioned before on that thread by providing a link to https://kitware.github.io/visualizer/docs/compatibility.html.

The latest version use Wslink which replace our previous communication infrastructure that was based on WAMP. The new code provide better performances and mostly work the same way except that you need to make sure the client and the server are compatible. (like before too)

I would say Visualizer is currently the best one to start your app from.

The launcher configuration should remain the same. You just need to adjust the path to the script to refer to the wslink one.

I have already patched the showBuiltin argument problem yesterday.
The problem shown in the logs of above screenshot seems like some other problems. you can have a look

I don’t know what to say. I currently use my PV 5.5.2 for my current Visualizer dev without issue, but I did patch the full protocol.py to use the one from PV/master.

Since it is hard to know what you are exactly doing, I don’t know if I can help.

Try using a nightly build of ParaView. Those version should work out of the box without edit/patch. 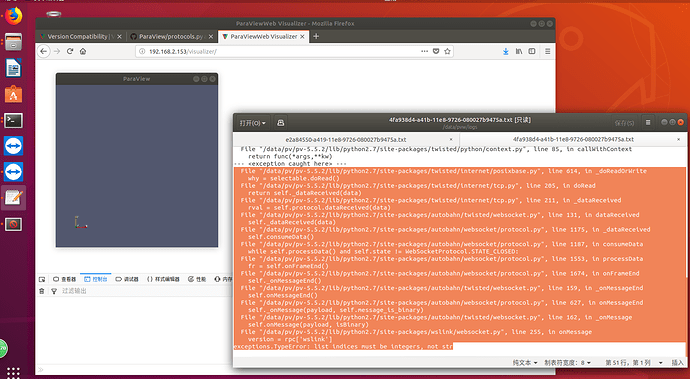 Your documentation show that only Chrome and Firefox support current ParaviewWeb app. I want to know why?
Do you have the plan to let other browers supporting Paraviewweb？ Where is the key technique?
Additionnally, could the mobile platform (ios/andorid/pad etc.) support paraviewweb app?

I guess the documentation should say any modern web browser. ParaViewWeb works well on iOS and should behave the same on Android.

The only browser that we know could have some issue would be IE. And even that could be fixed with some investigation…

I’m not sure to know what you mean by “Where is the key technique?”.

Moreover, I’ve never seen the error message you have in the console? Is it the launcher or the ParaView process?

You can see the selected log erro information in the screenshot. It seems that some error in the websocket.py file. I have patched both the Line 195 error and replace of protocols.py.

I may have seen similar error when the data directory contains files with special char. Try to point to an empty directory or else to see if that’s the issue.

I have clear the data directory, and try again. The previous script error disappear, but another warning information come out in the develop tab of brower, as the screenshot below: 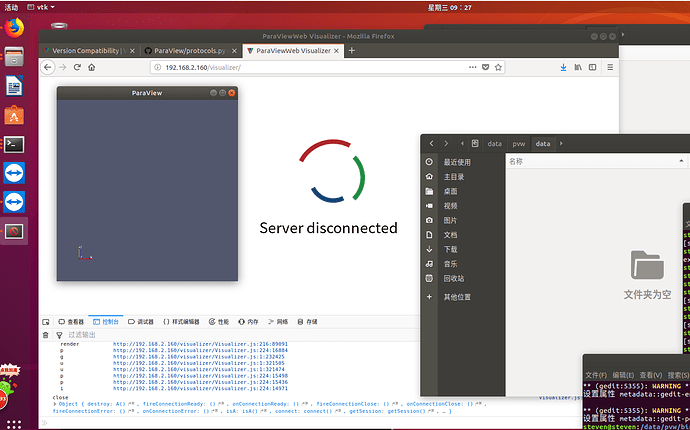 At that point the server log of the given process should give you the reason why the server process died.

So I still don’t know the reason of problem ?

Did you look at the log from the launcher for the given session? That will tell you exactly what is going on… Without that information, I don’t see how I can figure out why the server disconnected.

Yes, I see. But I still don not know how to solve the problem. Can you help me?