Texturing with TIFF files - a transparency and an extension problem

This issue started as a problem with texturing with a TIFF file in my PV derived “custom application”: I have there a “textured representation” that is supposed to add texturing to topo surfaces, like aerial photo with georeferencing information included - which works nicely most of the time.

But then I found a TIFF satellite photo (Geotiff) that did not texture the topo, but it made it transparent instead! And then I saved that same TIFF file (using QGIS) as another Geotiff, but now with JPEG compression - and this time the file was not only much smaller (ok, that’s obvious), but also it was showing like it should. I used the tiffinfo and geocp tools, put the output into two text files and compared them with WinMerge: 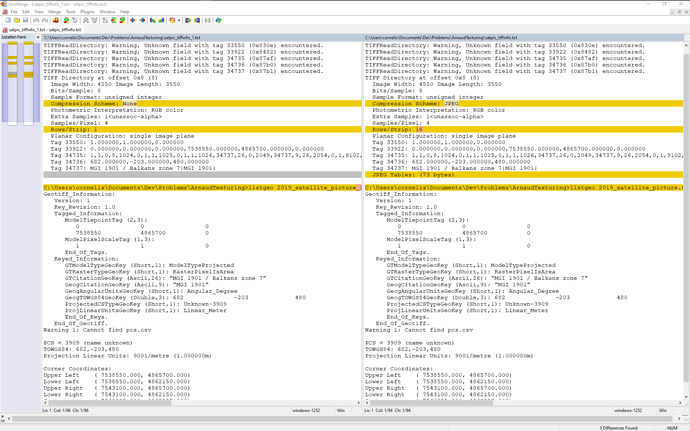 As you see, everything is the same, except for the compression and some “rows/strip” parameter.

Now I am a bit confused:

But first of all I did not want to report a problem in my own “textured representation”, but something that happens also in “plain vanilla ParaView” - and so I tried to simply texture the topo with the same TIFF files, just ignoring the georeferencing. And there I encountered the extension problem:

Meaning that obviously it was not able to read the tiff file - due to it’s “unknown extension”.

So there seems to be some problem with TIFF files also already in PV, not only in my own application!

Of course it is possible to convert the TIFF file into PNG, and use also QGIS to write the georeferencing info into an ESRI World file instead of some GeoTIFF tags, but still: I think TIFF should be somehow supported as well!

Can you share a .tiff file with this problem ?

I can share both TIFF files, but they are 63 and 8 MB (without/with JPEG compression)!

No problem, you should be able to share them here, if not you can go through a file sharing site.

Ok, I will send you the files, together with a fitting topo and a screenshow of how it should look: This was generated by first converting the TIFF files into PNG, and since the topo surface and the image are matching exactly, also the georeferencing info is not required: just using the “automatic” option of the “Texture Map To Plane” will do.

I am not going to publish here just in order to be a bit careful: it’s customer data.

Just one more finding: I was dumping the data from the first four points in the image, and there is indeed a difference in the alpha value in the uncompressed and the JPEG compressed file that MIGHT explain the difference:

Hmm, looks like I am looking at different points - which I need to check of course. But also I see that with the JPEG compression, the alpha values were “magically” changed from being all 0 to all 255!

From which I conclude:

I can confirm that by explicitly forcing all alpha values - if they exist - to being the maximum of the scalar type, the topo shows correctly now, nothing transparent any more!

So my own special problem is solved.

What remains: Also Paraview should not crash if you want to use such a file for texturing by using the TextureMapToPlane (or similar) filter.

Indeed, please open an issue so the segfault can be tracked and fixed.