Velocity vector as a quiver3d in ParaView

I found a way to create a quiver3d representation of the velocity field in ParaView using the regular Gliph filter. I changed the Gliph Mode to Every Nth Point (and change the Stride) or all points. I used the 2d Gliph arrow.
I have a couple of questions:
1.Is there a way to use a custom image for the 2d gliphs?
2. I tried to take the quiver figure from Matlab, wrap it as a texture on the object and compare the results. They looked similar but not 100 percent the same.
Does someone have any idea why?

Thank you in advance,
Misha

1.Is there a way to use a custom image for the 2d gliphs?

Yes, with a custom dataset, not a custom image. Use the GlyphWithCustomSource filter instead.

You will have to convert your spherical coordinates verctors into cartesian coordinates first.

I tried using the following equation that was taken from: 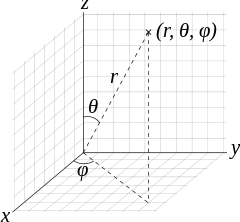 In mathematics, a spherical coordinate system is a coordinate system for three-dimensional space where the position of a point is specified by three numbers: the radial distance of that point from a fixed origin, its polar angle measured from a fixed zenith direction, and the azimuth angle of its orthogonal projection on a reference plane that passes through the origin and is orthogonal to the zenith, measured from a fixed reference direction on that plane. It can be seen as the three-dimension...

(by the way, I am not sure why there is no Pi in the calculator, and if the units there are in radians or in degrees)

However, this didn’t produce good results with the Gliphs. Even when I checked the box “Coordinate Results”.

Thank you for your help,
Misha

We indeed should have Pi in the calculator, @wascott opened an issue :
https://gitlab.kitware.com/paraview/paraview/issues/19210

Units are in radians, we could improve the doc, feel free to open an issue to improve it.
https://gitlab.kitware.com/paraview/paraview/issues

You should not check the box “Coordinate Results” as only your vector is in spherical coordinates, not your points.

Thank you very much for your response.

The dataset is the same as in my previous question:

Hi, I am trying to plot a velocity vector around a sphere, similar to Quiver in Matlab. Is there a way to do that? I have the U and V components. I tried to use the calculator filter and wrote : UiHat+VjHat. After that, I used the Gliph filter, but the gliphs were incorrect. Thanks, Misha

There is nothing like that. You will have to figure out the conversion into cartesian coordinates.