no text appears in the pop-up windows, when moving the cursor on filters

I am using paraview on a virtual macine (VM-ware). My problem is not a big issue, however it would be great if this problem could be fixed.

When I move my cursor on arbitrary filters (e.g. Clip, Rescale, Warp by Scalar,…) usually a small window pop-ups and shows some explanation what the correspondong filter actually does. In my case, the window pop-ups, but without the additional helping text, i.e. just an empty white window.
If necessary, I can attach a screenshot, but I guess my problem is well described.

I am not quite sure if this is actually a problem related to OpenGl/Missing drivers or if there is a simple setting inside paraview where I can activate the “helping texts”.

Any input would be greatly appreciated!

Not sure which window you are talking about. This information is displayed in the info status bar:

I attached a screenshot of what I am talking about. So for instance I move my cursor on the icon to change the background, then the little white rectangle pop-ups, but in my case it is not filled. (Usually the rectangle is filled with some text what the icon or filter does). I have this problem with all filters,…

Is it clear now what I mean?

Looks like a graphic driver / Qt bug. This would require deeper investigation in order to figure out what is going on.

Can you give me some catchwords where the problem may comes from respectively in which files,… I can have a look to may fix my problem?

It would be very helpful to me, if the helping texts were available.

“Qt tooltip do not appear” in google gives some insight.

What I’d do in your case would be building a simple qt app with tooltip to make sure this is a qt issue, not a ParaView one.

Thank you, I will give it a try!

I have seen that I use QT version 4.8.7. I guess this could be the problem, since it is recommended to use a higher version.

I tried to install paraview manually as you suggested, however cmake is reporting some error messages: 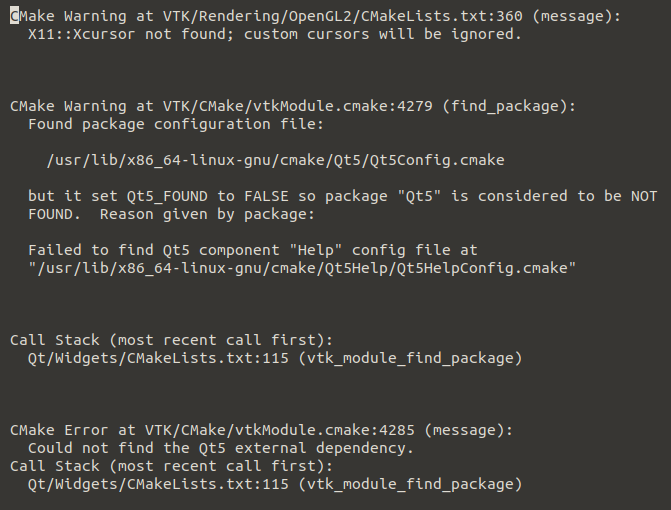 You have answered a similar question already in this forum where someone had the very same problem. After that error message I called cmake via:

Unfortunately the error message is not gone. I am not quite sure if my downloaded Qt, which I pass to cmake, is correct. Here is a screenshot of the folders I got after extracting Qt6:

Inside this folder I passed the cmake folder to cmake via -DQt6_DIR=… Is this correct?
By the way, the cmake error wants “Qt5 external dependency”, however I downloaded Qt6. Can this be a problem as well?

Not sure why you think you need to compile ParaView yourself.

I can open paraview now, but there is still a issue related to OpenGl:

I am running paraview on a virtual machine (vmware workstation player 16). On my host operating system, which is windows10, my graphic card model is “NVIDIA GeForce Rtx 2080”, OpenGL version 4.6.

Do you know if the workstation player of vmware supports a higher version of OpenGl than version 2.1? I know that within the pro-version there is a setting to support higher versions but I didn´t find a similar setting for the player-version.

Use mesa as described here:

Mesa is an alternative OpenGL implementation that let you run graphic application while not using your GPU driver. It can be very useful for a number of cases : GPU is unsupported by OS (Old intel GPU) GPU driver is incompatible with ParaView for some reasons (Intel Driver current issue) The OpenGL version provided by the driver is not high enough (VM, Remote Desktop) ParaView has been shipped with Mesa on Linux and MacOS for a long time, but building it on Windows is not something we have b…

I am running paraview on a linux distribution (ubuntu), i.e. my host is windows10 and my guest system is ubuntu and I run paraview in ubuntu.

Is there a similar approach as described in your article? In there only the implementation for windows10 is shown.

Why not using ParaView outside of the VM, in Windows ?

In any case, yes and no, you can build mesa to do that but there is no mesa binary for your case.