How to try out Catalyst2

Catalyst is an in-situ framework created as a part of ParaView a few years ago. With time and use, we saw the different drawbacks of our approach and then it was decided to create a new architecture, Catalyst2

With this new implementation, it is:

A previous tip explains how to use the legacy Catalyst.

Here is a short introduction on how to use a c++ example from ParaView code base. This code represents a simple simulation that make use of Catalyst2:

Once ok with this example, adapt this part to your own simulation.

Run the generated executable with a catalyst pipeline script as parameter (can be generated from ParaView, see bellow). The command is also added as a test (you can enable it in CMake and then use ctest).

The executable needs to find the paraview catalyst lib to do effective computation, so we need to point them through environment variables.

Default script only print some info in the standard output. To have some processing done, you have to configure it.

Be careful that the MPI version used to build the simulation should be the same that the MPI used by ParaView. In case of errors, you may have to build ParaView by yourself, so ParaView and simulation share the same version of MPI.
For this tutorial, you can also remove MPI-related line in the example source code.

To create your own script, start creating a pipeline in ParaView. Use the Extractors to write your results (screenshots or meshes).
Then use File / Save Catalyst State to export the python script. Live Visualization is an option you can enable in the export wizard.

catalyst2_pipeline.py (4.2 KB) is sample script taking screenshot and with live visualization enabled. You can also load it as a State File to inspect its content.

Use Catalyst / Connect menu in ParaView so ParaView will wait for catalyst input. Then run your simulation as explained above. The configured pipeline will appears in your ParaView session.

Use Catalyst / pause simu menu before starting the simu, so it will be paused on the first timestep, letting you inspect what you want. Useful because the simu will close the connection when terminating. (and examples code go fast). 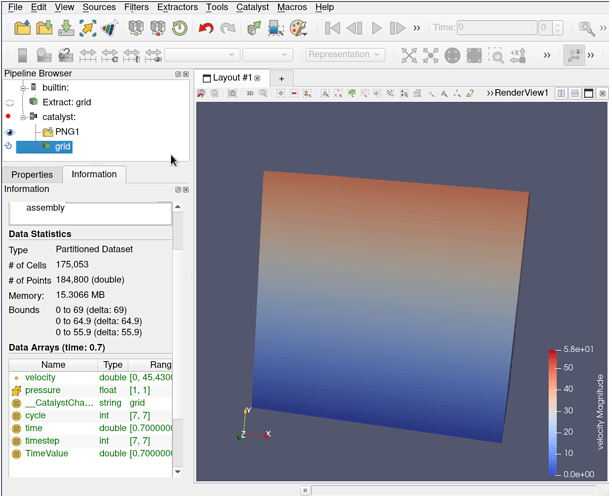 When simulation stops, it breaks the connection with the ParaView application so it is expected to have some error message like the following:

The catalyst API is really small (5 methods including an about()). What you have to do is to create a Conduit node to describe your data and pass it to the Catalyst API. This is usually done in an object called the Adaptor.
The API is as follow:

Nicolas, any objections to me putting this in the Catalyst docs as a getting started section?

This really is good. Thanks Nicolas! If we do move it into the getting started section, there are a few singie/plural and other trivial grammatical errors. Mind if I fix them?

Thank you Nicolas! This is really great! I’m trying to test the example. However, I get an error.

I have already followed your instruction as follows:

I get this error:

@cory.quammen : absolutely no problem to put it in the doc!
@wascott feel free to correct anyhing you want.

@gha3mi , Mixing MPI version is always touchy. You should either:

Thanks for this guide, I think it will be very helpful. Having setup Catalyst2 in my simulation code a few month back, I have a few comments on how this guide could be made a bit clearer, if that helps:

In the Building paragraph, clarify that these are additional instructions for building the dummy simulation code provided in the example, not ParaView or Catalyst. Perhaps say that this shows how the Catalyst headers are made available to the simulation code at build time and that this step will need to be reproduced in the real simulation code after running the getting started example.